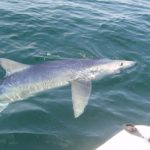 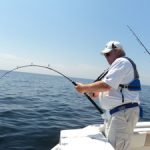 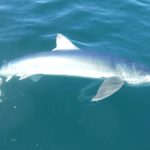 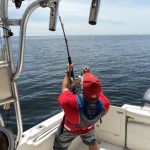 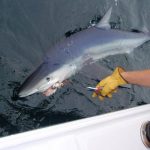 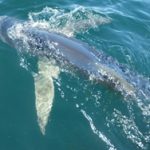 The Maine shark fishing experience can bring you the excitement and memories of a lifetime. An 8 hour charter aboard the the 30’ Morning Flight will give you a chance to catch one of four major shark species that invade the coast of Maine waters from early July until late October. August and September are the best shark fishing months when numerous hookups can take place on a single shark fishing charter. During this time the following shark species are available to catch by shark fishermen in Maine waters: blue sharks, thresher sharks, porbeagle and the famous acrobatic mako shark. These apex predators can weigh anywhere from 100 to 800+ pounds. Mako sharks have been known to leap 20 feet into the air in an acrobatic display when hooked. At these weights these sharks can provide an awesome fight on a stand up rod sometimes lasting over 2 hours!

Morning Flight charters practices “Catch and Release” of all shark species both for the safety of our customers and out of a deep respect for the resource.

All bait, Gear and Tackle will be provided on all charters.

About the shark species we’re after:

Mako Shark:
This shark is identified by the area under the lower jaw will be white, long gill slits and it’s snout is pointed. A great jumping game fish – very fast!

Porbeagle Shark:
This shark looks somewhat like a small white, or a chubby mako. They have a white strip or patch on the back bottom of the dorsal fin and a secondary keel on the tail.

Thresher Shark:
A warm-bodied shark that is very easy to identify because of it’s bizarre long tail. In some cases the upper lobe of the tail is almost as long as the body section!

Departures are based on schedule availability,
contact us for more details and availability.

For more information on what to bring for your
shark fishing trip, visit our Guided Fishing Trip Information Page or contact us with any questions.