When you head out on your next fishing trip, you’re not going to want to bring home every fish that you catch. Some fish may be too big or small, other times you may not have enough room left in your cooler to store them. It’s also better for the environment to release fish you don’t need in order to conserve that specific species. However, catch and release must be done properly in order to ensure the fish’s survival. Here’s how:

Reeling in your catch 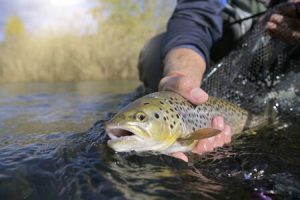 When you feel a bite, you’ll want to work quickly to prevent the fish from dying or becoming exhausted. Stay close to your line so that you can set your hook as quickly as possible, preventing the fish from swallowing the bait or hook. Then, avoid playing the fish for too long and try to land it as soon as possible.

Once you’ve reeled in your catch, avoid taking it out of the water. Removing the fish can cause it to suffocate and it can put it under a great deal of stress. Instead, support the fish in the water with either a landing net or your own hands. If you decide to handle the fish yourself, cradle it gently and don’t squeeze it tightly.

Time is of the essence here, as the longer you take to remove the hook the more likely you are to hurt the fish. Keeping the fish in the water, use a pair of needle-nosed pliers or other hook removers to quickly remove the hook. If you’re having trouble doing so, leave the hook in and cut the line as close to it as possible.

After you remove the hook, don’t let the fish go immediately. Give it some time to recover by holding it underwater in an upright position. Check to see if the gills are opening and closing and then let go.

Ready to go out onto the water? Then contact Morning Flight Charters today to schedule your next fishing trip.